So what IS Traditional Archery? Simply put, Traditional archery is shooting with a bow and arrow as a sport and requires a high level of focus and concentration. Traditional archers generally do not use any kind of devices to improve their chance of hitting the target.

It’s you, the bow and the arrow.

Maybe an armguard and a finger tab, nothing more, nothing less.

Traditional Archery enthusiasts consider themselves hardcore. They live and breathe archery. Bowhunters might say something like ‘archery isn’t a hobby, it’s a way of life’. You could consider traditional archery as organic. Some bowhunters and target shooters make their own equipment. In some cases, you do not have to rely on a bow shop to make changes or repairs for you. The ability to work on your own equipment makes this sport great.

Traditional archery is not an ancient sport that was recently revived. It’s a sport with a long established history that continues to attract new enthusiasts. You will find individual and team events for men and women at the Summer Olympics. A 2016 survey by Responsive Management compiled for the Archery Trade Association reported archery and bowhunting activities increased by more than 20% from 2012 to 2015.

What is a Traditional Archery Bow? 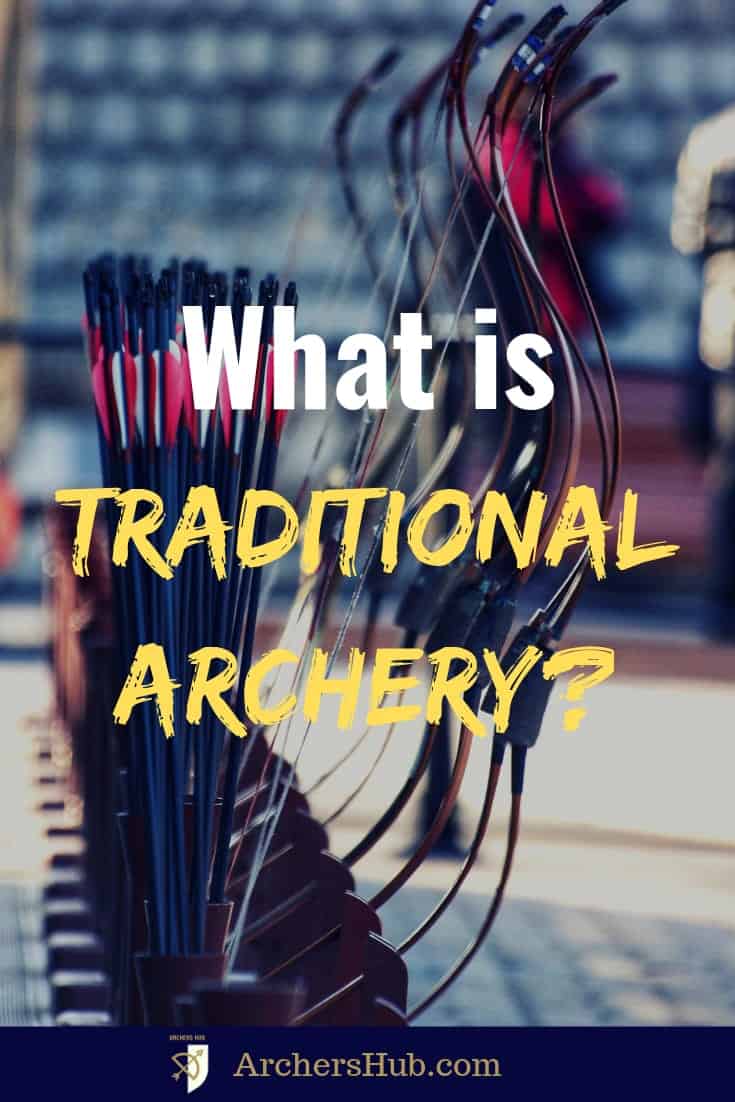 This traditional bow was made from either wood, horn of animals and sinew. The bow was laminated together. The sinew and horn bow could store more energy than the wood bow of the same length. The origins of the composite bow date back to Asiatic farmers who used them for daily activities.

Also known as the American Flatbow, it was developed in the 1930s. The development was the result of research to find the best cross-sectional shape for a bow limb. It is sometimes known as the semi-Indian bow.

This form of traditional archery has been around since about the 14th century. It was used for hunting and warfare. During the 100 years’ war, it was a defensive weapon. The English had a distinct advantage over the French because of the longbow. It was easy to use, and they could reload faster than the French crossbow.

Men in England from about age 16 to 65 owned a longbow and practiced routinely. The cultural aspect of the English longbow was its use a weapon for the militia. The longbow is made from one piece of wood. Yew trees made the best longbows.

Essentially, this is a bow that is relatively flat with wide limbs. Flatbows are made of wood although laminated and composite flatbows have been made. They were traditionally used by Native American tribes, some ancient Europeans and Inuit tribes. Flatbows were replaced in Europe by yew longbows.

The Mongol bow is more of hybrid or combination of the recurved and composite bow. Popular until around the 17th century, this traditional bow was made of bamboo, horn, and sinew. The composition was bound together with animal glue. The use of animal glue meant the bows could be ruined by rain or excess humidity.

Usually a one piece bow, some self-bows are spliced together in the handle from two pieces. The advantage of a self-bow is the material used to make them varies to include local material in most parts of the world. Self-bows are shorter than traditional longbows but they are about the height of the archer. They can perform as well as composite bows. In most of Africa, North and South America, Northern Europe and Southern Asia, most traditional bows are self-bows.

The big advantage of this traditional archery bow is the ability to be transported because it is shorter when broken down. Another advantage is you can change the bow by changing limbs. These features make takedown bows an excellent choice for Olympic Archery.

Here is a partial list of some characteristics of traditional archery bows.

Just as important, is choosing the correct arrow. A traditional archery lover will buy good arrows or make their own. By good, what does that mean? Good arrows are made to perform and are not reproduced to fill a store shelf. When you use well-designed arrows you will get better performance from your bow. A craftsman makes arrows. An arrowsmith makes arrowheads.

The range of targets is as endless as the archer’s imagination. Some archers will prop up pieces of natural materials. Others will buy 3D targets which they use for improving their hunting skills. Range shooters might decide to just practice target shooting. Either way, targets are an essential piece of traditional archery gear.

Shooting gloves come in many different materials. Whether you choose leather, a synthetic or deerskin the decision should coincide with the kind of traditional archery you practice.

There many choices for your style or archery. Bowstrings are made of Linen, hemp, sinew, silk and hide. Simple strings made of fiber have been used worldwide and are still effective. Flemish Twist bowstrings are more common in the US and Europe.

Modern bowstrings made of polymers such as Dacron, Kevlar and Vectran have a higher density than non-polymer bowstrings.

Usually made from leather, finger tabs protect the fingers yo use to draw back the bowstring. For traditional archery styles that use the thumb to draw the string back, thumb rings are used to protect your thumb.  They are made of materials such as antler, bone, wood, stone and leather.

The arm guard is used to protect the inside of the archer’s forearm when shooting.

While there are definitely some risks involved with Traditional Archery, it is very safe provided you follow basic safety principles. Many accidents can be avoided through education, courtesy, common sense and knowing the rules. Certified instructors make sure archers are familiar with range rules, safety signage and more.

Knowing the rules is just part of safety. The other part is following them. Some people love to say things like ‘rules were made to be broken’. Rules were made to make organizations and events fun, exciting and safe.

Practice good sportsmanship. If you are not having a good day take it easy and keep things simple. Often people forget that being on the range can help reduce the day to day stress they go through. Certified instructors and coaches ensure all participants are aware of the range rules.

The following is a link to the 2016 Archery Safety Brochure

Make sure your equipment is in good or excellent condition. There is nothing worse than trying to have a good time with faulty equipment. Keep your bow and equipment clean and in good working order.

Traditional Archery will continue to attract new enthusiast each year. Some get involved as target shooters. Others get involved as bowhunters. Some people start out with compound bows, while others start out with composite recurves. It does not matter where you start your traditional archery journey. What matters is that you find the peace of mind and joy that attracts so many to the sport.

Traditional archery has a long and glorious history. People from all walks of life have been drawn to the sport by its simplistic and focused discipline. It is hard to find another activity that has been mentioned throughout history the world over in the same way as traditional archery.

Just look at the recent surge in characters who are archers.

Legolas (The Lord of the Rings/The Hobbit)

Susan Pevensie (The Chronicles of Narina)

This just a partial list. The evidence speaks for itself. If these characters were not selling tickets to movies, Hollywood producers would not continue to cast roles for archers in general and women specifically.

The word traditional has more than one definition. It could mean; long-established or handed-down. You can find references to archery that go back centuries. Archeology, books and oral history from cultures the world over mention archery.

The interpretation is different between various customs, cultures, and traditions. Traditional Archery can disclose many aspects of a culture.

This form of traditional archery is a type of martial arts. It can be found in the philosophy of Zen as well as Shinto ceremonies. The archer does not make any unnecessary moves. Each action has a specific purpose. In Zen it is not the target that the archer aims at. In shooting the arrow he will find the self the in the target. It is about leading to the discovery of the self.

This form of mounted traditional archery is performed on horseback. The bow is made of bamboo that is smoked and dried for 6 months before it is built The grip is in the lower third portion of the bow. The skills required to be successful combines archery and horseback riding. The archer shoots at three targets from a galloping horse.

A legend about Korean traditional archery said that an archer could shoot a bird from a moving horse. Developed over 5,000 years, it focuses on the archer practicing discipline before, during and after releasing the arrow. This aspect is consistent through all the cultures where archery was a key element.

In Jeonju, Korea, there is a 300-year-old traditional archery competition. In this form of competition, the distance between the archer and the target is 145 meters or 475.722 feet.