It’s been 20 years on now from the last time I shot a bow and I’m trying to figure out what bow to buy to get back into archery.  I know I want to focus on traditional archery and I know I want to be able to hunt some day and possibly compete.

I know that compound bows can go all the way up to 80 lbs or more but that seems absurd for a recurve.  That got me thinking: what is the most common draw weight for traditional archery?

I decided to randomly ask some real people who are passionate about traditional archer to see what they all use.

I asked 23 archers whose focus is traditional archery (either shooting with a recurve or a longbow) what draw weight they use and whether it’s for hunting or for target archery.

Let’s look at some of the reasons for these draw weights.

The last time I shot a bow I was 11 years old.  At that time, I was shooting a youth compound bow with a draw weight of 25 lbs.  Before that, I used a red fibreglass Walmart Special of unknown draw weight.

It must not have been very much because I could pull it back without any problem and I had to aim at the top of the bale to hit dead center at 15 yards.

I used these bows only for target shooting at the local outdoor range where I grew up: Forest City Archers in London, Ontario.  I shot one 3D tournament with my 25 lbs compound bow and came in 2nd place. They even spelled my name wrong in the paper. That was one of my proudest moments.

Some of them had many bows to switch between because, why not? Archery is awesome!

The point is this: there was always a purpose that drove the philosophy behind using the draw weight they chose; the Philosophy of Use.  I’ve zeroed in on 3 POUs: Hunting, Target Shooting and Do-Everything

The first Philosophy of Use for a traditional bow is hunting.  Of the 23 archers I spoke to, 13 bows were used for hunting. Now, the minimum draw weight for hunting in most jurisdictions is 40 lbs, so that pretty well takes care of the lower range.

I initially thought that most hunters would use higher draw weights so I was surprised to see that the most common draw weight for hunting was 50 lbs.  In fact, only 3 archers used draw weights in the 60 lbs range and only 1 archer used a draw weight in the 70s.

It comes down to what’s comfortable.  When you’re hunting, you have to hike all the way out there and all the way back.  You have to be prepared for what Nature may throw at you.

You need to have a lot of energy and you don’t want to spend it all drawing your bow.  Also, the typical shot on a deer is at 30 yards or less so you don’t have to deliver really high velocities over long distances.

So what’s the philosophy?

Obviously, meet the legal minimum but just be sure to add just enough power to get the job done.  Now it makes sense to me why 50 lbs is the most common draw weight for traditional bowhunters. 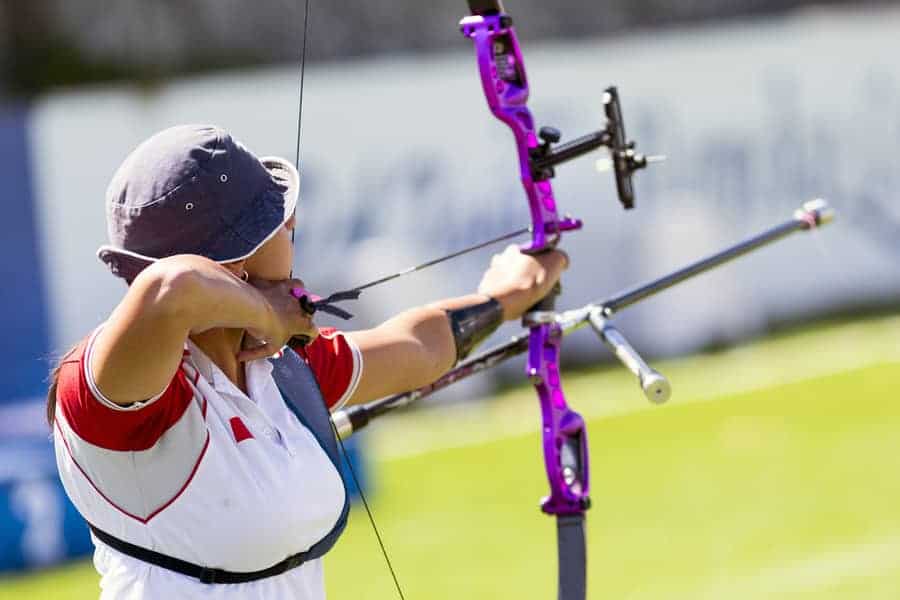 When it comes to traditional target archery, I’ve discovered that there are at least 3 distinctions that can be made based on the target itself:

It seems that 40 lbs is the sweet spot and when given a choice, these archers would choose a 40 lbs draw weight simply because it’s a joy to shoot.  It gives you enough challenge AND you can shoot it all day.

Target shooting is much more relaxed than hunting.  You don’t need to worry about conserving your energy in case you need to spend the night in the woods and you’re likely not hiking for miles (especially on an indoor range).

There is also no minimum regulated draw weight for the purposes of ensuring a clean kill on an animal. So, archers are free to shoot whatever is comfortable to shoot all day long.

You do, however, want to be very accurate and this has a lot to do with arrow tuning but also the draw weight.  It seems that 40 lbs is a sweet spot to deliver enough velocity for just heavy enough arrows to fly with enough stability to reliably hit accurately.

The philosophy, then, is enough power stable arrow flight and light enough to shoot all day.

That brings me to my 3rd philosophy of use: the do-everything bow.  If you’re like me, you like to do things on a budget but get the most quality for the money.  When it comes to draw weight, that means I want a bow that can reasonably be used to both hunting and all forms of target archery.

Of the 23 archers I spoke to, there were 4 who only did target shooting while the vast majority did both target shooting and hunting.  The reason for this is because you can only hunt for part of the year and most archers love archery so they keep shooting in the “off-season” to hone their skills.

And what to the majority of these archers use?

They use a 40 lbs draw weight.

We’ve seen above that a 40 lbs draw weight is good for hunting and good for target shooting.  And that just about covers the range of things to do with a bow (I’m counting bowfishing under hunting).

As I’ve said earlier, it’s been quite a long time since I last shot a bow.  From talking with these 23 archers, I’ve learned a few helpful tips when considering draw weight especially if you’re up there in years or getting back into it after many years:

Recurve draw weight for a deer

Most jurisdictions say the minimum draw weight for bowhunting is 40 lbs.  You can very easily take down a deer with a 40 lbs bow if you use heavy enough arrows.

Try 500 grains to start and then settle on the heaviest arrow you can shoot accurately. For a complete discussion of this, see my article answering the question Is a 40 lb bow REALLY enough for bowhunting?