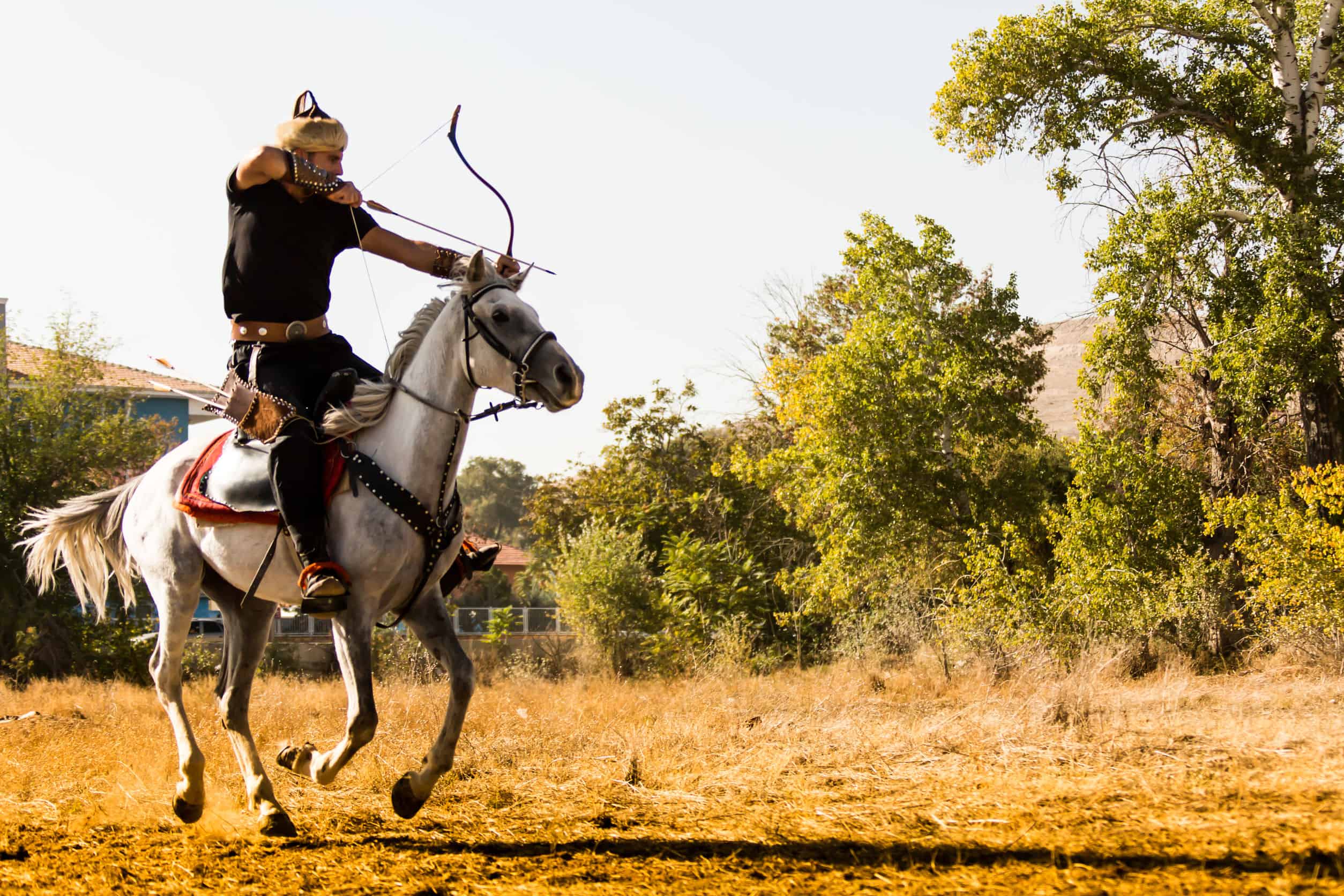 Have you ever heard of horse archery?

Ask any enthusiastic archer or archery fan and they’ll tell you there’s something magical about seeing the arrow fly into the target. Honestly speaking, archery is tricky enough when standing stable on the ground. But if that’s not challenging enough, imagine how challenging it can be on the back of a horse running faster than 30 mph, feeling the wind in your face and trying to shoot targets!

Also known as mounted archery or horseback archery, horse archery is a fast-paced adrenaline sport that involves shooting arrows at a target while riding a horse. Blending speed and accuracy, this sport requires the archer to ride the horse, which is obviously galloping at high speed, while still shooting at targets. This sport calls for a high level of coordination, agility, extreme balance and an absolute connection between the horse and the archer.

The recent surge of interest in horseback archery can be attributed to its appearance in mainstream pop culture through franchises such as Avengers and Hunger Games. However, it’s a tradition with a rich history.

Dating back 400 years, this ancient tradition and sport has its roots in some of the most powerful empires of centuries past such as the Ottomans and the Mongols, as well as in other ancient cultures including European Nomads and Native Americans.

The above-mentioned cultures used horse archery for hunting and combat. However, this is now changing. Its resurgence is friendlier and is today considered a very serious sport in various parts of the world including the United States, Europe, Australia, and Asia. For you to be able to accurately hit even a single target while riding from horseback, you’ll definitely have to go through an intense training regimen.

But before even delving into the training stuff, here are some of the most crucial things you should know about horse archery.

What kind of Bow is used in Mounted Archery?

It’s perhaps important to start by noting that compound bows or any other bow with a mechanical trigger is strictly prohibited in mounted archery. This is because there are higher chances of you shooting off your hand or accidentally injuring the horse. In fact, any bow with a peak draw weight in excess of 60 pounds isn’t allowed. The main idea here revolves around the fact that a high poundage bow will fatigue your arms more quickly, thereby making it quite difficult to consistently pull a full draw.

That’s said, you should consider using traditional curved and recurved composite bows, which are generally used in competitions. These types of bows are compact enough and can allow you to shoot correctly from horseback while still retaining appropriate range and penetrating power. 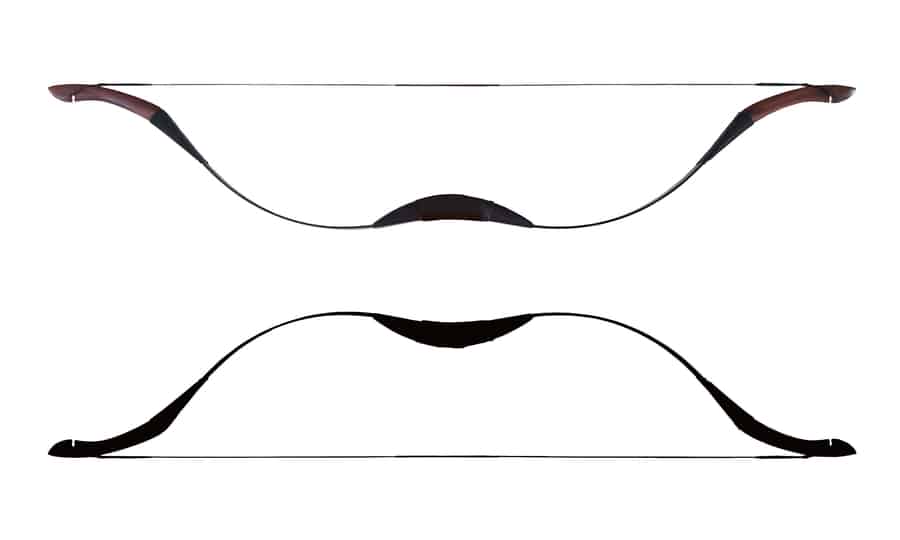 In most cases, targets are only 7 meters (23ft.) away and cannot exceed 40 meters (131ft.). For this reason, you should go for a compact and light bow. Something between 25-35 pounds for thumb draw or 30-40 pounds for a 3-Finger draw would just be
sufficient.

There are a lot of excellently made bows for mounted archery. Whether you need a bow for the entry-level or as an experienced horseback archer, you’ll find something that can work perfectly for you.

What kind of Arrow Quiver do you use for Mounted Archery?

An arrow quiver is basically a container that helps you hold your arrows and can be carried on an archer’s body. Many mounted archery competitions require you to shoot the arrows from a quiver. On the contrary, others may require you to shoot from your hand, but such competitions are rare. But even if you want to indulge in mounted archery just for the fun part of it, we’d recommend you get a perfect quiver to protect your arrows and hold them in one place.

As you can imagine, there are several quiver styles such as leg, back, and hip quivers. The best type of quiver for mounted archery is the thigh or hip quiver. The main idea behind mounted archery is shooting targets at high speeds. You should, therefore, go for a thigh quiver with an individual slot for each arrow to allow for a faster draw so that you don’t waste time pulling out the arrow from the quiver. 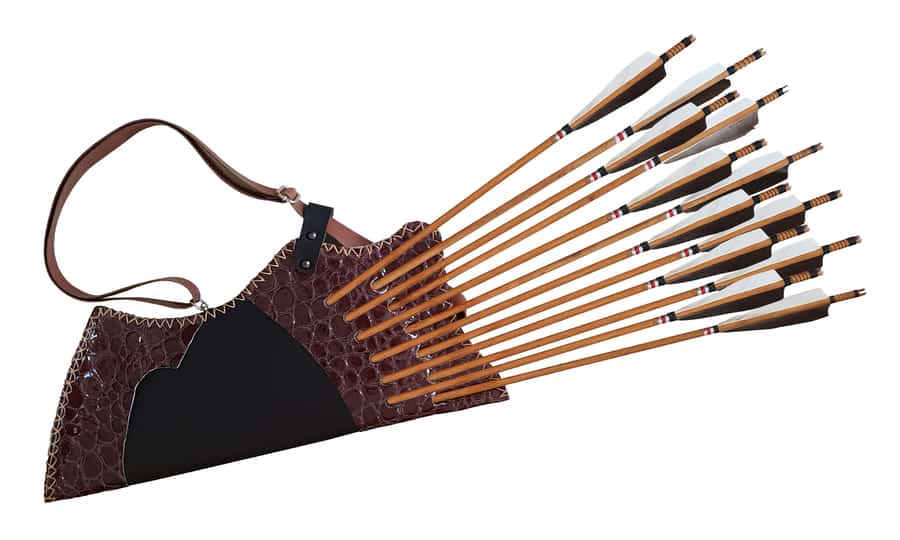 Do I Need Special Arrows for Mounted Archery?

In terms of material, you should go for arrows made of carbon fiber, aluminum or bamboo since they’re the best for mounted archery. Additionally, having 2, 3 of 4 fletchings made of feathers on each arrow are highly recommended because they enhance accuracy. You’ll be shooting at high speed, and so you need feather fletchings because they’re softer on your hands and can move faster through the wind. Although you can use plastic fletchings as a beginner, they aren’t up there in terms of accuracy because of their stiffness, and that’s why you’ll unlikely see them in competitions.

All in all, you should check to make sure that you purchase arrows that are compatible with your bow.

What kind of Saddle is used for Mounted Archery?

It’s an obvious fact that the horse is much more your partner in mounted archery. The horse is indeed a crucial part of this sport, and can’t be considered just a piece of equipment. With that in mind, the most important thing to consider when choosing the right
saddle for mounted archery is how comfortable and secure it is for both you and the horse.

We, therefore, recommend an English saddle, which allows you to sit in a two-point position (which is the preferred rider position) or some kind of a modified half seat. Unlike Western and Australian saddles, which put a rider in a chair-like position, English saddles are designed with the stirrups positioned underneath the rider’s center of balance and are lighter, and not in front or bulky like many Western and Australian saddles.

You can also consider an archery saddle modeled after ancient Mongolian and Chinese saddles. There are also perfect models from Brazil. Some of the best saddles for mounted archery that are currently available in the market include McClellan Cavalry Saddle and Black Badger.

While we may have individual preferences when it comes to mounted archery saddles, your confidence and balancing techniques play a great role in this sport. Remember, if you aren’t a balanced rider, the archery saddle will slip from side to side and this will likely diminish your accuracy and competence.

In addition to the obvious skills of horsemanship, which requires you to absorb the high-speed movements of the horse in your hips, you must have a high level of hand-eye coordination. You should always keep in mind that the main basis of mounted archery is speed and accuracy. For this reason, you’ll need to be extra fast as there’s no time to sit in your anchor and focus. 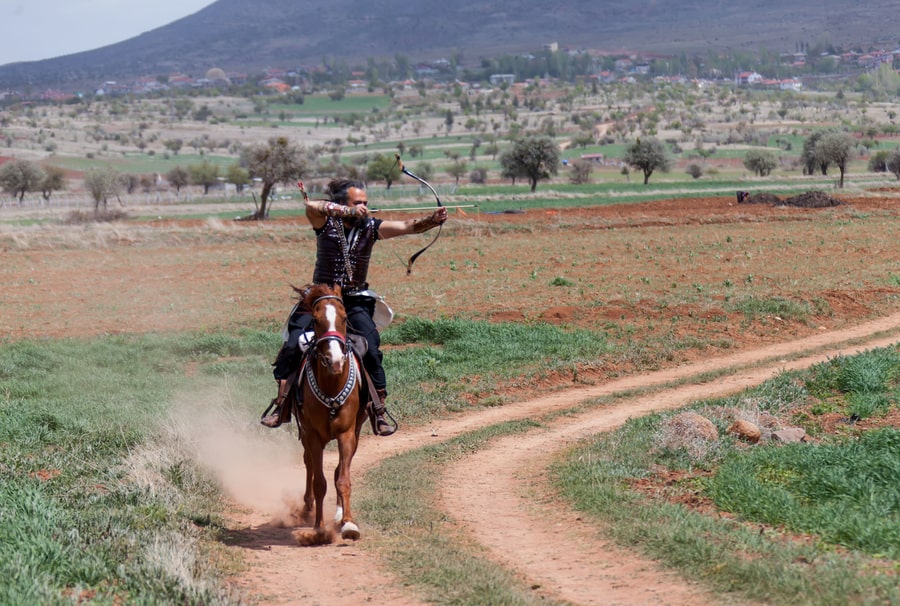 You’ll, therefore, need an excellent combination of muscle memory, have the skills to calculate arrow trajectory, have impeccable hand-eye coordination and have the ability calculate the distance to the target, which may constantly change. As such, you have to look, draw, anchor and release; all in a matter of a second!

In terms of the arrow draw techniques, you can use various techniques including the pinch draw, the Slavic draw, the thumb draw, the Japanese draw, and the popular Mediterranean technique.

With the thumb draw technique, you can place the arrow on the right side of the bow so that it doesn’t fall off the arrow rest when you’re on the move. You’ll only use your thumb to grasp the string while the index and/or the middle fingers close over the outside part of the thumb so as to reinforce the grip. Also known as the Mongolian draw, this technique makes it easier to reload the bow. Again, there’s a decreased risk of injuring yourself as the arrow isn’t inserted between the string and the bow arm.

The forefinger is placed on the string above the arrow while the middle finger and the ring fingers lie on the string below the arrow. This technique requires the arrow to be placed on the left side of the bow for right-handed archers and vice versa for left-handed archers. It requires you to keep the effort in the hand at a minimum with the fingers doing much of the work. You can either keep your wrist straight or flexed away from your body so as to reduce tension and offer faster relaxation and release.

This technique requires you to squeeze the end of the arrow between your thumb and index finger. It’s one of the easiest techniques and is perfect for beginners.

Based on traditional Japanese archery of using a unique type of thumb draw known as torikake, you’ll have to use a three or four-fingered leather glove. You can wrap your thumb around the string just below the nocking point so that the string sits in the horn groove. You’ll then use your index, middle and ring fingers to bend and squeeze the string against the thumb groove for release.

It requires you to place your middle, ring and little fingers on the string below the arrow and should be held in the same manner as the Mediterranean technique. You have to hold the string by the first and second link of the finger while straightening and pressing the arrow by the index finger. At the same time, the thumb holds the arrow from the other side as you release.

In short, these arrow draw techniques need lots of practice and training. However, you should always remember that horse bows are generally shot over the outer side.

They include; World Championships (held every other year in Budapest-Pomaz, Hungary beginning 2018), European Championships (held every other year in various locations) and the European Grand Prix Series (an annual event that has been in running since 2014). There are also a lot of competitions held in the U.S., Britain, and Australia, as well as in various Asian countries.

Can you Hunt with Mounted Archery?

There are no laws restricting you from hunting with mounted archery in the United States. Generally, state laws do not have specific stipulations on mounted archery, and so it is legal to hunt with mounted archery. However, it’s important to ensure your safety and that of the horse is of priority and maintained at all times. For instance, you can consider putting on bright clothing so that your horse isn’t confused for a game by other hunters.